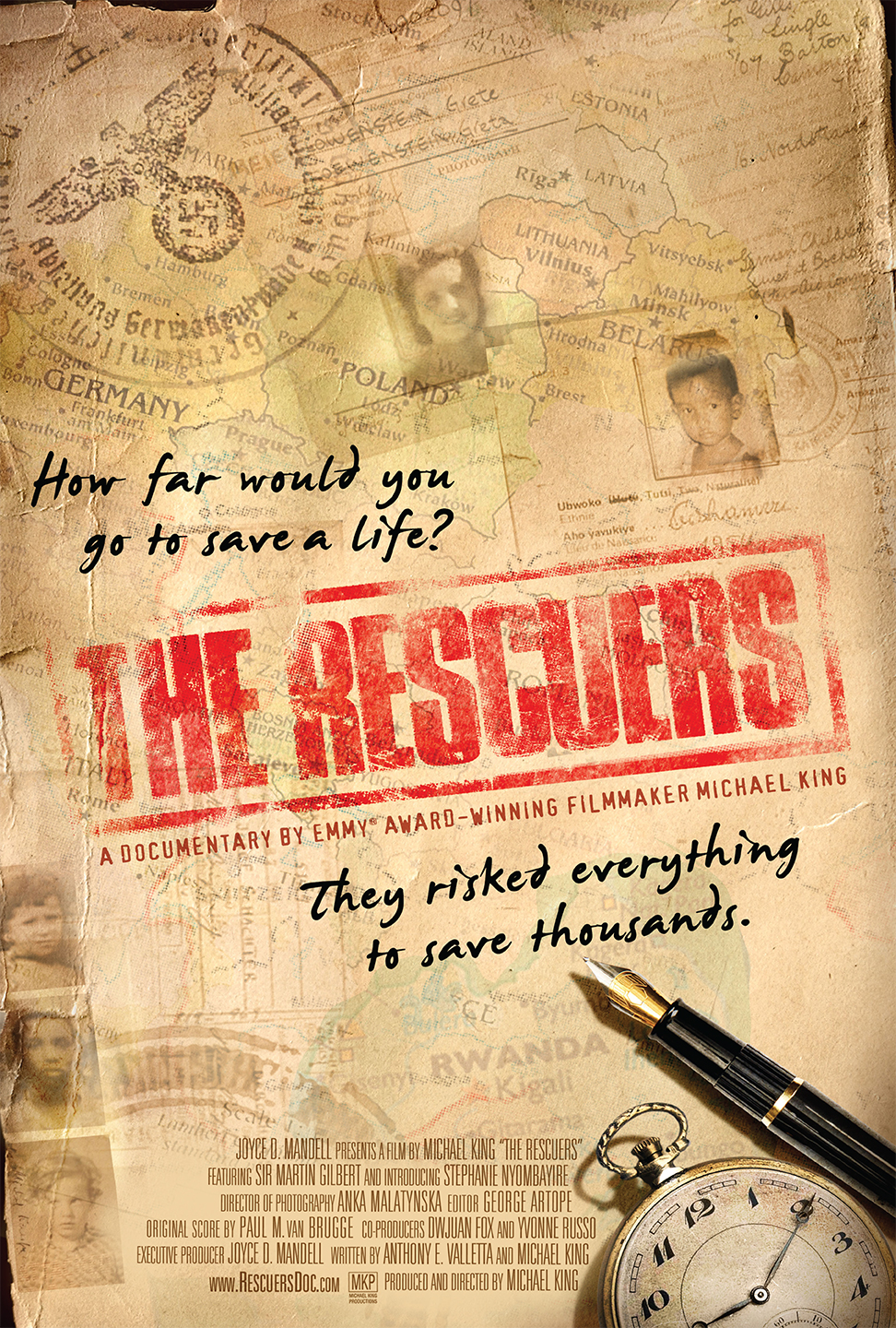 THE RESCUERS, the latest film from Executive Producer Joyce D. Mandell and Emmy Award-winning filmmaker Michael King, uncovers the largely unknown stories of 13 heroic and courageous diplomats who, at tremendous personal cost, saved tens of thousands of Jews during World War II. The film follows Stephanie Nyombayire, a young Rwandan anti-genocide activist who lost 100 members of her family in the Rwandan Genocide of the 1990s, and Sir Martin Gilbert, the renowned 20th century and Holocaust historian, as they travel across 15 countries and three continents interviewing survivors and descendants of the diplomats. Nyombayire and Gilbert explore “the mystery of goodness” and “moral courage in the face of danger” in contemplating the horrors of the past, in part, to better understand what should be done to stop the ongoing genocide in Darfur and elsewhere.

Often going against their own government policies, many of the World War II diplomats, who were not Jewish, willingly sacrificed their careers, families and livelihood, working desperately to save people they didn’t know. Their actions raise the question of the mystery of goodness. What leads one person and not another, to do the right thing regardless of the consequences they may face? What causes one human being to bypass praise or reward for his action, and just do something good and right because his instinct, soul and spirit knew he had to, at all costs and by any means necessary?

Using amazing archival footage and weaving documentary style and dramatic re-enactments, the film takes us from Sir Martin’s personal library in London, to the streets of the Champs d’Elysees in Paris, to the sacred Valley of Destroyed Communities at Yad Vashem in Jerusalem. The interviews with survivors and descendants of the diplomats continue through Germany, Denmark, France, Poland, Lithuania, and finally Budapest, the scene of the largest diplomatic rescue effort in history.

During the film, Nyombayire explores some painful truths. She interviews Lieutenant General Romeo Dallaire, former Force Commander of the United Nations Peacekeeping Force in Rwanda. Dallaire states in an interview with Stephanie about the U.N.’s position, “When the genocide started, my mandate as a U.N. Peacekeeper ended. There was reticence to get into another exercise in Africa, because they had just had Somalia a few months earlier and that was a debacle. The U.N. didn’t want to get into another African complex problem and was trying to do it on the cheap. Hopefully it would resolve itself. So it meant that Rwanda, Black Africa, didn’t count.”

Among those featured in the film are German diplomat (and Nazi Party member) Georg F. Duckwitz in Copenhagen; Americans Varian Fry and Hiram Bingham in Marseilles; Japanese Consul Chiune Sugihara and the Dutch Jan Zwartendijk in Kaunas; Turkish Consul Selahattin Ulkumen in Rhodes; British Captain Frank Foley in Berlin; Polish diplomat Henryk Slawik in Budapest; and Swedish diplomat Raoul Wallenberg, who helped coordinate the rescue efforts in Budapest in 1944 with Archbishop Angelo Rotta, who represented the Vatican; and Consul Carl Lutz of Switzerland and others. The film also features His Royal Highness Prince Charles, The Prince of Wales, revealing a little-known story about his family.

How to break the cycle of genocide and other crimes against humanity is a hugely complex issue on all levels. THE RESCUERS seeks to open a dialogue with today’s government leaders and their diplomatic representatives throughout the world. It challenges them, and all of us, to use our moral authority and power to save lives in danger throughout the world.