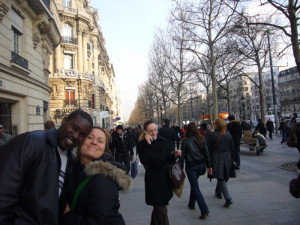 As adept at leading a hundred-person crew through the monsoon-soaked jungles of South East Asia as she is at cultivating an intimate atmosphere on a three-person documentary shoot, Anka is equally at home behind the lens of a multi-million dollar blockbuster as she is on an indie guerilla shoot. Anka’s traveled the world and back, hob-nobbing with dignitaries and diplomats, and hanging with East L.A. gangsters. She speaks three languages fluently, and is comfortably conversational in half a dozen more, which only enhances Anka’s ability to make absolutely anyone and everyone feel comfortable in front of the lens. Armed with an adventurous spirit and a keen understanding of human nature, Anka’s off-time is spent sucking the marrow out of life itself, be it trekking the Himalayas or surfing the cresting face of a twenty-foot wave.

Anka has traversed the globe photographing feature films & documentaries over the past decade: from National Geographic’s Most Amazing Photos television series to Walden Media’s latest feature Dear Dumb Diary.  Anka began photographing her way around the world at fifteen.  A distinction for student cinematography from the Academy of Television Arts and Science earned Anka an apprenticeship with noted cinematographer, James Chressanthis, ASC, which has since blossomed into an on-going creative collaboration. Anka went on to attend AFI, from which she graduated in 2007 at the top of her cinematography class. After graduation, Chressanthis nabbed her to shoot his directorial debut, No Subtitles Necessary; The Story of Laszlo Kovacs and Vilmos Zygmond, featuring Sharon Stone, Sandra Bullock and John Voigt. The film premiered at Cannes in 2008, and continues to garner acclaim and success at festivals the world over, including a Best Documentary win at the Santa Fe Film Festival.

In 2010 Anka received a Best Cinematography award for the feature- length documentary The Rescuers: Heroes of the Holocaust, for which she traveled to 12 countries spanning three continents with Emmy Award winning director Michael King.  Her first full-length film, Camjackers, starring Olivia Wilde, was released in 2008. She filmed her second feature, The Lazarus Papers, starring Danny Trejo, Bai Ling and Tiny Lister, on location in Thailand in 2008.  Anka’s feature clients  include Jerry & Janet Zucker – who produced the latest feature Anka lensed for Tony Award Winning director and creator of Rock of Ages Kristin Hangi. Kristin’s and Anka’s collaboration on the children’s musical Dear Dumb Diary will premiere on the Hallmark Channel September 6th, 2013.

Anka’s work as a cinematographer propelled her to directing & shooting commercials as well as working on her first feature documentary In the Shadows of the Himalayas, which follows the her fathers climbing ascent and death on the roof of the world.  Having the opportunity to be mentored by some of the best cinematographers in the world, she has become a mentor and teacher to aspiring filmmakers worldwide.   She is driven by her belief in immense power of media and is committed to working on films that inspire & influence positive change in the world.

“Anka is suburb DP with an incredible eye for color, composition, and light, as well as dynamic camera movement. And what’s more, she’s a wonderful storyteller — she gets inside the tone of a piece and organically understands what it needs. Anka can move from a poetic moment to a humorous one with ease and great fluidity. Her crews adore her and she has a special way of bringing out the best in people. I feel blessed to call Anka one of my closest collaborators. She makes filming a total joy!” – Kristin Hanggi, Creator Rock of Ages

“We hired Anka as our Director of Photography on Dear Dumb Diary, a $5 million ninety minute film with seven musical numbers. Our budget only allowed us 24 days of shooting and four leads were under twelve.  Anka made every single day. Her dedication to the film and the realities of our budget were a invaluable asset to the picture. Despite the schedule, he work showed striking creativity, reveling a great deal of depth to the shots and colors that would bring a kid’s musical to life for a youthful audience.  She immersed herself into the world, developing color palettes for our various characters and locations.  She also employed a clear vision for lighting each of the dynamic dance numbers that highlight the movie.  Anka was totally collaborative with the director as well as all other departments.  The finished film looks beautiful!” – Janet Zucker, President Zucker Productions

Anka brings so much more to the job than a camera.  Her thoughtful, friendly approach to the story and characters belies her dedication to her craft.  She makes excellence seem effortless. – Martha Conboy Executive Producer National Geographic, Director Smithsonian Channel.