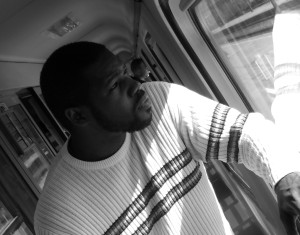 Has been trained in visual art his entire life. He attended Interlochen Arts Academy, one of the top ten boarding schools in the US for high school. At Interlochen, he majored in painting, drawing, ceramics and wood cut. In college he traded story telling in a single frame for the multiple frames of film and video. Dwjuan was awarded an Emmy for his work on Irrashi, a PBS Japanese language show that he was a lighting director on. He considers his path as a producer a natural progression, he has worked his way up from a production assistant on Rookie of the Year and Blank Man to his present credits as a Producer on features Scout, Undiscovered Gyrl, Needlestick and We the Party. Dwjuan currently has over ten credits as a feature film producer.

Dwjuan took a hiatus from his motion picture career at the start of the Bosnian / Kosovo Conflict and joined the US Army. Dwjuan quickly gained Sergeants rank and served in a Light Armored Cavalry Unit at the Joint Readiness Training Center at Fort Polk Louisiana. Dwjuan transitioned to the Officer core and served as a Tank Commander and Platoon Leader in a forward deployed Armored Battalion at Camp Casey in the Republic of Korea. Dwjuan completed his military commission in the 7th Infantry Division IRT, a special unit created to train and track three brigades of deploying soldiers to Operation Iraqi Freedom. While at the 7th ID IRT, Dwjuan developed the IRT Standard Arabic Language and Culture Program. Dwjuan went on to obtain his Masters degree in Producing from the prestigious American Film Institute in Los Angeles California. In consequent years Dwjuan has become the recipient of the Multicultural Motion Picture Association, Bank of America and Producer’s Guild of America Diversity Awards.

Next to founding Decipher Entertainment, Dwjuan holds his most notable work yet, as producing documentary feature, The Rescuers. The Rescuers was nominated for a 2012 Image Award. The documentary gave Dwjuan an opportunity to combine his film and military training by maneuvering up to 20 personnel, and equipment, by train, plane and automobile through thirteen different countries and five currencies over a combined six months of filming, all the while creating a project with substantial significance to the past and future state of humanity.