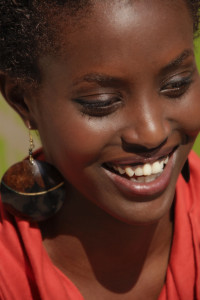 During her freshman year at Swarthmore College, Stephanie Nyombayire co-founded the Genocide Intervention Network. As a representative, she traveled to over a hundred colleges, high schools to speak against the Darfur Genocide and give citizens the tools to take action. Stephanie has reported on the Darfur crisis from the Chad-Sudan border with MTV and testified before the Texas Senate Commission, which unanimously passed Senate bill 247 on Divestment from Sudan. Today, the Genocide Intervention Network has raised over three million dollars and divestment bills have been passed in over twenty states.

In 2007, Stephanie was named one of Glamour magazine’s Top Ten College Women for her work on Darfur. Stephanie was honored by Rwandan First Lady Jeannette Kagame for her role in founding the Genocide Intervention Network, and in 2008 was invited to speak on a Clinton Global Initiative panel on student activism.

In February, she will begin a two-month journey throughout Europe as part of a documentary that aims to shed light on the heroic actions of diplomats who went against their governments to save the lives of persecuted Jews.

Today, Stephanie is working with Orphans of Rwanda, Inc.-an organization dedicated to helping orphans and other socially vulnerable young people in Rwanda pursue a university education and ultimately become leaders in driving economic development and social reconciliation. After her studies, she hopes to return to Rwanda to continue empowering and serving the youth.